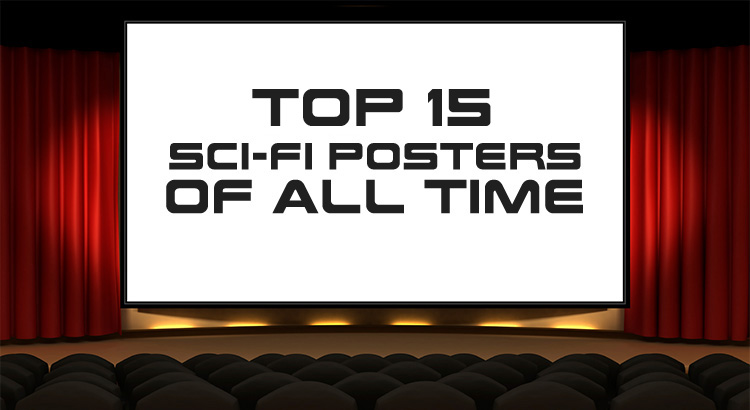 At Discount Displays, we have been printing custom printed posters for over 30 years, in this time we have seen very creative posters from hundreds of different industries. To keep up-to-date with the latest trends, every so often we look at commercial poster design and pick our favourites, here is our review of the 15 best sci-fi movie posters.

A film involving virtual reality space? You definitely need a high-tech and futuristic poster to back this up, and this certainly does the job. Disney did a fantastic job with the stylish surrounding graphics make the finished poster even more stunning. This poster is also a remake of the poster from the original Tron.

This vintage poster from the 1970s is part of the golden age for illustrated posters. Outer-space thriller Silent Running is a classic example of this. The vibrant image will definitely get viewers wanting to see more.

As well as being known for making brilliant films, Star Wars has a long tradition, right from the beginning, of making fantastic posters. The Last Jedi is a perfect example of this. The vibrant side-by-by portrait shows Daisy Ridley’s Rey and her lightsaber split down the middle, building up the tension for the film.

This poster for Prometheus has a majestic, and mystical feel to it, that leaves viewers wanting to see more. This poster is compelling and reflects the films storyline about mankind trying to find its origin in the stars.

Plan 9 is often seen as one of the best-worst sci-fi films ever made, but it doesn’t change the fact that it comes with a stunning vintage poster. At least the team behind Plan 9 got one thing right.

10. Indiana Jones and Raiders Of The Lost Ark

A classic film like Indiana Jones needs a classic poster to go with it. The action-packed poster plays on the character’s personality in the form of stylish, sleek graphics in just one shot. This vintage poster helped Indiana Jones become the trademark character that he is today.

9. The Day Of The Doctor – Doctor Who

There had been a lot of excitement for the 50th anniversary of Doctor Who, with a massive promotional campaign. No other sci-fi TV programme on the air has lasted over 50 years.

Ok, not a movie, but this remake of the classic 1970s sci-fi film had high expectations and needed a state of art poster to keep viewers guessing. The poster is stunning but doesn’t give much away – just like the TV programme.

The poster from this classic film looks like a photograph, but it is actually a painting by the fantastic Drew Struzun, who also designed posters for
The Shawshank Redemption, Blade Runner, and Star Wars among many more.

Known as one of the scariest sci-fi films of all time, this iconic poster completely sums up Alien with its terrifying, futuristic design. Ground-breaking for 1979.

Not every sci-fi movie poster needs to be overdramatic with futuristic graphics. Sometimes the most straightforward ones are the most effective. This stunning poster ultimately sets the film into tone in just one image portraying lots of emotion.

This wondrous poster from the classic Steven Spielberg movie is instantly recognisable, with the portrait showing Elliot and his new extra-terrestrial friend flying past the moon on a bicycle.

The poster from this iconic classic Japanese animated film is very symbolic, due to the placement and angle of the motorbike and visual impact of the colour red.

This highly visual portrait gets you ready for this classic alien invasion film, showing how significant the alien threat is, compared to one of the world’s tallest buildings.

A gutsy choice in a post 9/11 world. The statue of liberty being shown decapitated caused quite a stir when it was released. What is great about this poster, and the promotional campaign of the film, is that it doesn’t give you any idea of what the monster looks like.

Have a better pick? Let us know in the comments below!