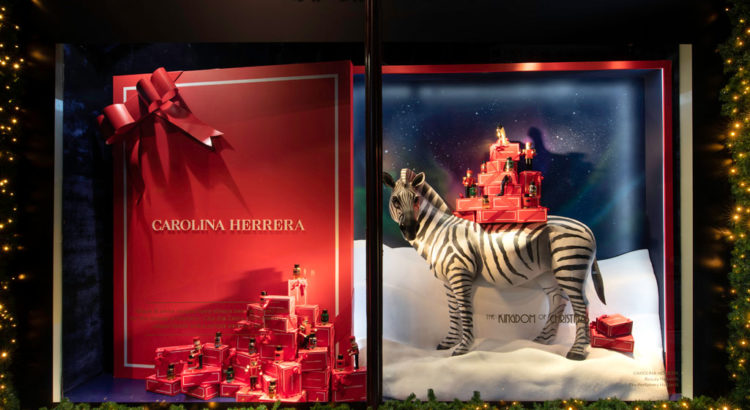 With online shopping on the rise and retail declining year on year, it is now more critical than ever that the UK’s top retailers to create eye-catching displays to draw customers in. Part of the buzz around Christmas are the incredible window displays lighting up high streets up and down the country.

Since the rise of social media and online sharing a video or image can go viral overnight, creating lots of positive attraction and excitement.

Every year the Christmas advertising campaigns become more and more extravagant with the likes of John Lewis and Tesco battling it out to see who can create the best Christmas advert.

Last year the John Lewis Christmas advert had over 14 million YouTube views alone! This means that eye-catching windows displays from retailers such as Harrods need to pull out all the stops to match this with their physical marketing campaigns.

Sit back, have a glass of mulled wine while we take a look at some of the best Christmas window displays from the UK in 2019.

5th place goes to a business that has been around for over 110 years!

This year Christmas came early for Selfridges as their ‘A Christmas for Modern Times’ themed display has been on there shop window since 17th October, earlier than any other department store in the world!

In 2019 Selfridges window displays are themed around children’s fairy tales such as Cinderella and Jack and the beanstalk with a modern twist.

This involved Selfridges showcasing their products as part of the window displays story line, such as the 3 bears house having an futuristic mirrored interior and pearl hair slide collection adorning Rapunzel’s tresses.

This fantastic design took over 500 hours to produce and definitely fulfills the aim of creating a traditional Christmas window display with a modern twist.

4th place goes to the oldest business on this list, they opened their doors way back in 1707!

The Fortnum & Mason 2019 Christmas display involves a range of cats in red jackets preparing their Christmas store. This eye catching quirky display will be sure to grab the attention of passers-by fitting with the vintage feel of Fortnum & Mason.

This stunning display which was designed in-house is a tribute to Edward Bawden, the artist that designed Fortnum’s Christmas campaign in 1958.

The window displays have eight different moving features such as presents being wrapped and a mince pie assembly line.

3rd place goes to one of the most luxury department stores around the world!

Harvey Nichols 2019 Christmas displays are set around one of the Earth’s most mysterious wonders, the northern lights.

They have created animations of the northern lights projected onto the displays to create a range of contrasting colours.

Their display carries on the Scandinavian theme with mannequins in Harvey Nichols’ Christmas collection sitting on a vintage deck with Christmas garlands and cedar slat panels.

This fantastic display is meant for people to notice different aspects every time they look at it and is very Instagrammable.

The department store in second place lives in a traditional Tudor building in Great Marlborough Street.

The 2019 Christmas display at Liberty has been inspired by their Christmas print Jeweltopia.

The extremely colourful window displays have deep teals, pink and velvet materials as their background with crystals and jewels placed around them, creating a luxurious and seasonal feel.

This displays also feature exotic animals, mystical fruits and bonsai trees instead of the traditional conifers. This creates a stunning display which will draw customers into their store.

This display took over a year of planning and eight days to install.

Our 1st place goes to one of London’s most famous department stores.

Founded way back in 1849 on Knightsbridge’s Brompton Road, the theme of Harrods 2019 Christmas window display is the kingdom of Christmas, incorporating the aspect of magic throughout the display.

Harrods creative concept was inspired by the fantasy world that is dreamt up by children’s writers, including animals as figures of magic and escapism. The displays include festive animals such as Reindeer helping Harrods deliver Christmas gifts to children.

So there you have it, our top 5 picks for Christmas window displays in 2019. Have you seen a better one? Let us know in the comments!